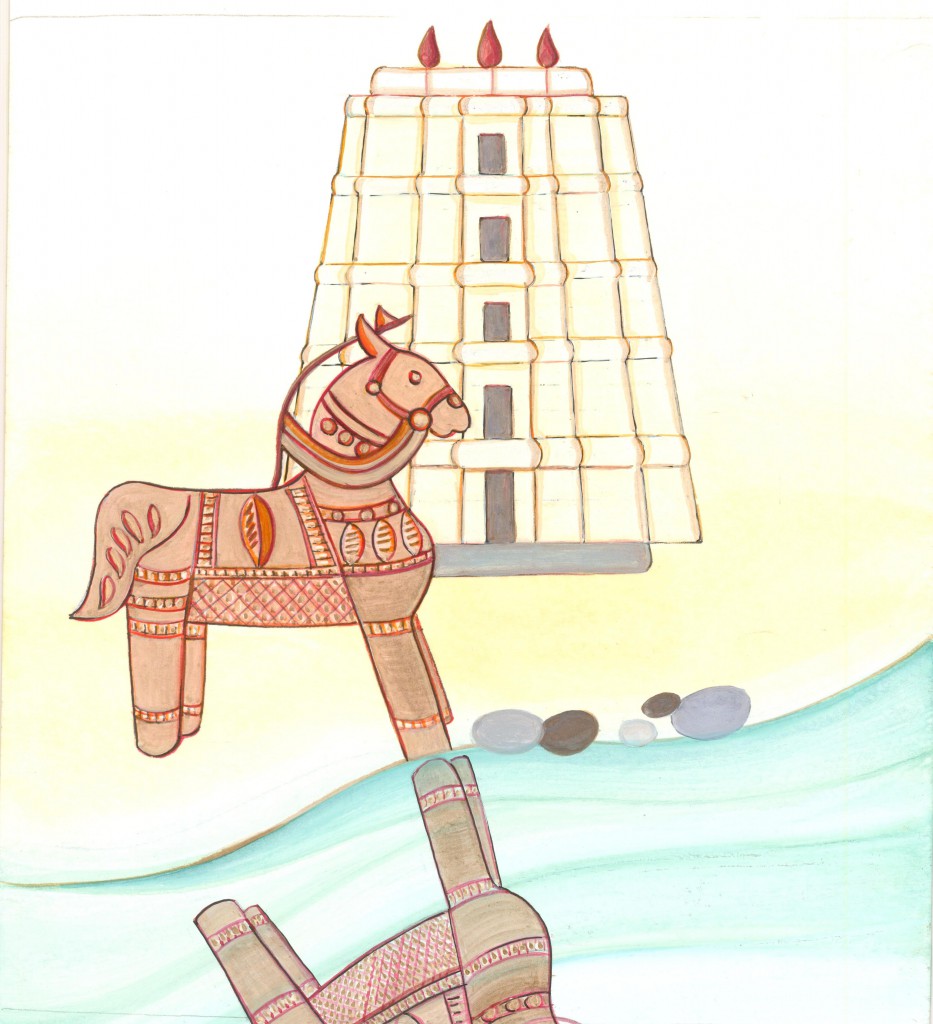 Fascinating journey into the heartland of Dravidian culture. The state of Tamil Nadu lies in the southernmost part of the Indian Peninsule and offers a wild variety of majestic temples epitomizing the remarkable artistic and architectural skills of the Chola Empire (Medieval time). The journey begins at Chennai and ends on the backwaters near Kochi in Kerala for a 4 days relaxing ayurvedic stay.

Break on the Coromandel Coast at Mahabalipuram, the former port city of Pallava’s dynasty which houses a group of sanctuaries carved out of rock in the 7th and 8th centuries.

Stopover in a jungle camp  nearby and a day visit to the Irula Tribal Women’s Welfare Society.

A stop at Pondicherry, the former french trading post for nearly three hundred years and the international neighboring community of Auroville  founded by the spiritual collaborator of Sri Aurobindo, The Mother. Peaceful stay in an eco center facing the Bay of Bengal. Exploring marine biodiversity and the fishermen villages.

Restful & lovely sojourn at the picturesque Tranquebar, the former 17th century Danish trading post on the sea side.

East into the Kaveri Delta and Tanjore

A world heritage site, three all stone temples, built by the Chola Kings, which are architectural marvels: Tanjore, Darasuram and Gondaikondacholapuram temples. The uniqueness of all these three temples is that they are similar in architecture, style and are replete with sculptures and epigraphs.

To the southern part of Tamil Nadu, Karaikudi

Chettinad is famous as the land of Chettiars, the wealthiest merchant families of Tamil Nadu. The Chettinad houses with lavish furnishings – woodwork and ceramic collections from across the globe still reflect the opulence of the bygone era.

Stopover at the island of Rameshwarem (reached via the Pamban Bridge across the sea). A truly appointment to come across the ancestral rituals of Hindu cosmology.

Journeying back to Chennai by train

The city today is a curious mixture. While it retains the legacy of the British Raj, the city is, in some ways, a conservative bastion in social and religious matters as well as the Bollywood of South India and simultaneously a stronghold of traditional Tamil culture mixed with shopping malls and colorful multiplexes.

Enjoy peaceful and beautiful landscapes of Kerala with a stop in an organic farm situated at the boarder of the Periyar Tiger Reserve then a rejuvenating treatment on the Malabar coast.

Sleep over in charming homestays and peaceful ashrams.

Enjoy the charming colonial towns on the Coromandel Coast.

Taste of Kerala and enjoy ayurveda treatment in an ecofriendly place in the backwters.

Arrival at Chennai airport. Installation into a comfortable B&B in the residential area of Alwarpet. Thriving library within the house, introduction to the olden times of Tamil Nadu and its legacy around a tea and snacks.

The sea here, on the east coast – romantically named the Coromandel Coast – is not as inviting for the swimmer as India’s western Malabar Coast but the city beaches bustle with groups of picnickers and strolling families. At night, lights from fishing boats can be seen glowing over the dark waters.

Evening outing in auto rickshaw up to Marina beach.

One of the most interesting parts of Chennai lies just south of the city center in Mylapore flanked by a tank, a market area and some old Brahman houses. At the evening bazaar, crowds of people, freshly bathed, make their way to the splendid Kapalesvara Shiva Temple.

Dinner and overnight at your hotel.

Mahabalipuram, (1h30) on the Coromandel Coast facing the Bay of Bengal.

Visit the Pallava’s dynasty site (a UNESCO  site dated from the 7th and 8th centuries), such as Rathas  (temples in the form of chariots), Mandapas (cave sanctuaries), the famous giant open-air reliefs ‘Descent of the Ganges’.

Free lunch. Visit the Shore temple with thousands of sculptures to the glory of Shiva.

Late afternoon departure for the jungle camp (1h). Installation and dinner at the camp.

Towards Pondicherry, 3h by road to an eco-ashram (Solidarity India).

Installation at the center located on a white sand beach facing the Bay of Bengal (23km from Pondicherry). Lunch & introduction to the Gandhi precepts of eco-home within the ashram.

Visit the surrounding fishermen villages and experience the here and now of their existence. Dinner at the ashram.

The concept of “an ideal township devoted to an experiment in human unity” was founded as a project of the Sri Aurobindo Society on February 1968 by Mirra Alfassa, “The Mother”. She was spiritual collaborator of Sri Aurobindo, who believed that “man is a transitional being”. Mother expected that this experimental “universal township” would contribute significantly in the “progress of humanity towards its splendid future by bringing together people of goodwill and aspiration for a better world.”

Visit different units of production. Free lunch in the restaurant of a recycle paper jewelries workshop. Stop at the visitor center and Matri Mandir.

Back to the beach and the ashram.

Dinner at the ashram.

Departure for Pondicherry* after the breakfast (30mn by road).

*Today, more than 50 years after the withdrawal of French trade (1674-1954), the French presence can still be felt within the partly French-speaking Indian population, as well as through many cultural organizations and colonial buildings. And it was none other than Jawaharal Nehru, one of the fathers of the Indian nation, who desired that Pondicherry should remain ‘a window onto France”.

Visit the vibrant vegetables and flowers market within the bazaar. Shopping.

Installation at the hotel in the ‘white town’.

Walk through the colonial town, its charming buildings and hidden garden of bougainvillea. Possibility of massage.

Going away to Chidambaram temple (2h).

Chidambaram is one of the Panchabootha Sthalas, where the Lord is worshipped in his manifestation as sky (space, aether). “Pancha” means five, bootha means the elements: earth, water, fire, wind and space and “sthala” means location.

The unique feature of this temple is the ornamented image of Nataraja. It depicts the Lord Shiva as the Lord of the dance Bharatanatyam, it is one of the few temples where Shiva is represented by an anthropomorphic murthi (statue) rather than the classic anionic Lingam. The Cosmic Dance of Lord Nataraja symbolizes the motion of the universe as sustained by Lord Shiva.

Discover the ancestral rituals still performed within the temple. Introduction to the Hindu pantheon and Chola architecture.

Afternoon departure for the peaceful Tranquebar *(1h30) on the Coromandel Coast.

This former 17th century Danish trading post (from 1620 to 1845*) is highlighted by the signature town Gate, the imposing Fort and a few churches.

Installation into an ancient pavilion facing the sea. Visit the charming town.

Free dinner and overnight at the pavilion.

*Among the first Protestant missionaries to set foot in India were two lutherans from Germany, Bartholomâus Ziegenbalg  and Heinrich Pluetschau, who began work in 1705 in the Danish. Settlement of Tranquebar. Ziegenbalg translated the Old and New Testaments into Tamil, imported a printing press, and printed the New Testament in Tamil in 1714.

*Gangaikonda cholapuram= the architecture is a portrayal of complex carvings on the hard granite stones, irrespective of the simple style of Cholas. The creativity of sculptors is reflected in the figures of dancing Nataraja and peaceful Sarasvati (goddess of culture) and of Shiva-Parvati, Ardhanari (the half man-woman manifestation of Lord Shiva). The colossal shrine also addresses several significant bronzes of the Chola age.

The Airavatesvara temple at Darasuram near Kumbakonam was built by Raja Raja II (1150 A.D.)

Out of the three, Airavatesvara temple at Darasuram stands out for its intricate, beautiful sculptures. The temple in the form of a chariot being pulled by an elephant and horse with a fleet of steps is no doubt a depository of Indian art and culture.

Installation and dinner in home stay in a quiet village out of the city.

Visit the beautiful Brihadesvara temple of Thanjavur in the morning. Free lunch and afternoon.

*Thanjavur, a grand capital for over a thousand years to the Cholas, has its pride in the awesome 11th century Brihadesvara Temple which was built by Raja Raja Cholan. It is big in all aspects with a 212 feet Vimana (chariot), a big Nandi at the entrance (the bull which serves as the mount for Shiva and the gatekeeper of Shiva and Parvati), a big lingam and a big Goddess Periyanayagi statue. The temple is full of rare sculptures, chola period paintings, epigraphs that give details about the history of Raja Raja Cholan.

Dinner on the spot.

Explore different rural community of Chettinad where the population of predominantly potter caste villagers have worshiped  (village god of Tamil Nadu)) since ancient times as a guardian deity who protects the rural villages.

Going away to Rameshwaram after lunch (4h ).

The temple dedicated to Lord Shiva and located on the island of Rameswaram is an interesting huge temple both from the standpoint of its association with Rama* and from a structural standpoint. The temple is spread over an area of 15 acres and has lofty gopurams (towers), massive walls and a colossal Nandi. Rameswaram Jyotirlinga also boasts of a 4000 feet long pillared corridor with over 4000 pillars, supposedly the longest in the world.

*According to the Hindu epic, Rama, the seventh avatar of the god Vishnu, prayed to Shiva here to absolve any sins that he might have committed during his war against the demon-king Ravana in Sri Lanka.

Installation and Diner in a hotel near the temple.

Early morning rituals on the pilgrim beach of Danishkodi.

Free lunch at the guest house before to reach Madurai.

Visit one of the most active and busy temple of south India, Meenakshi temple during the evening.

Night and dinner at the hotel.

Installation in an organic farm in Cumbum valley settled in middle of fruits plantations.

Luncher and guided walk in afternoon . Visit of the plantations, farm and surrounding area with amazing views. Dinner on barbecue in the nature.

Departure for an island, half an hour from Kochi .

You are welcome by Geraldine in her heavenly house in the middle of a lush garden with view on the river Periyar.  The rooms are small bungalows built with natural material.

After a consultation with the vaidia (ayurvedic doctor) , you follow daily yoga and ayurvedic treatment. 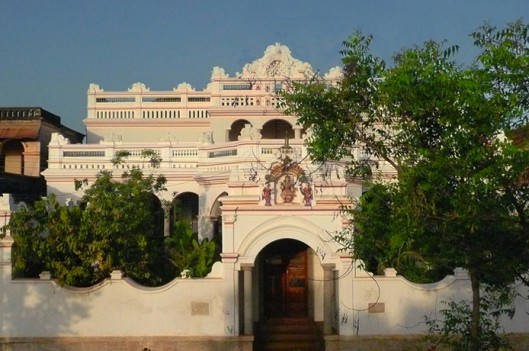 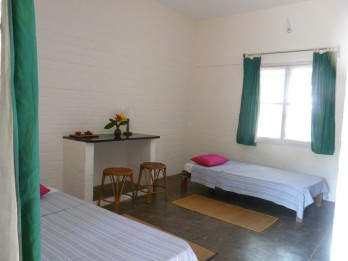 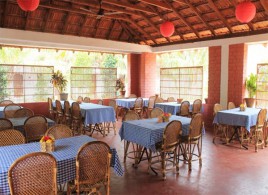 All over the year except during the Indian summer (April, May, June) best time is winter.

The price is by person based on a double occupancy in a room.

The transport by AC car all the way.

The accommodation in double room in guest houses, homestays including breakfast.

The full board in eco centre of Pondicherry.

The half board mentioned on the program.

Activities and outing mentioned on the program.

The 5% for the developement fund.

The half board not mentioned on the program

The tea breaks on the road

The entrance fees for all sites and museums

The tips (compulsory in India for the staff, drivers…) 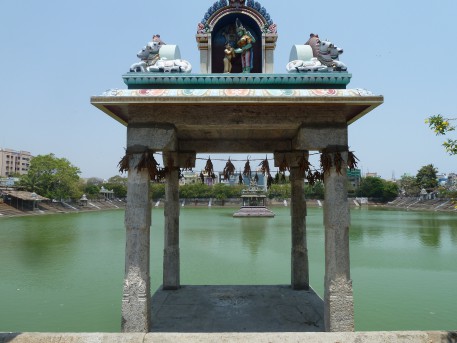 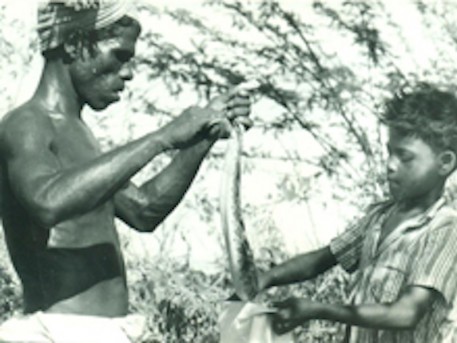 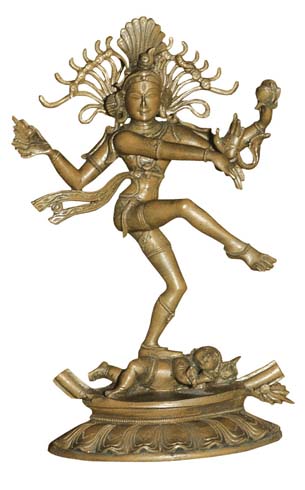 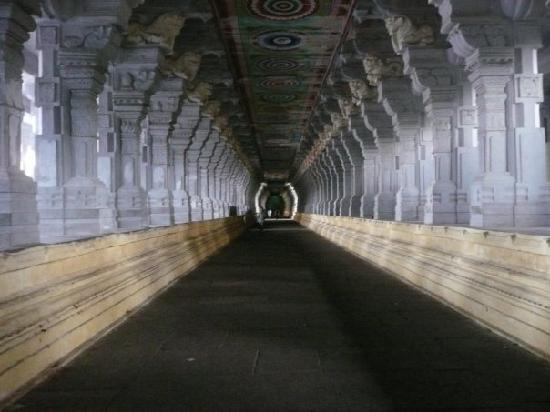 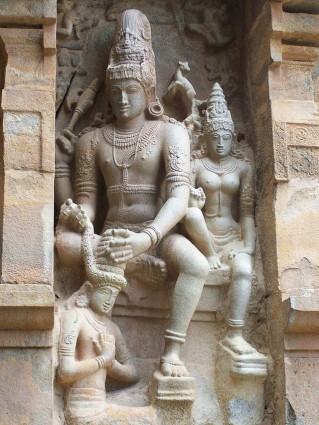 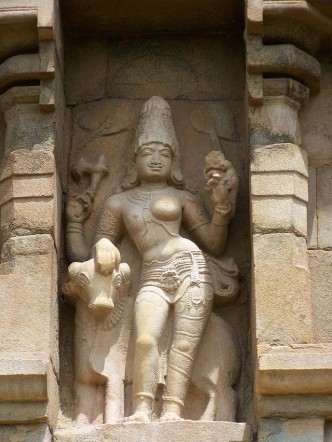 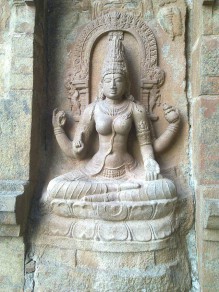 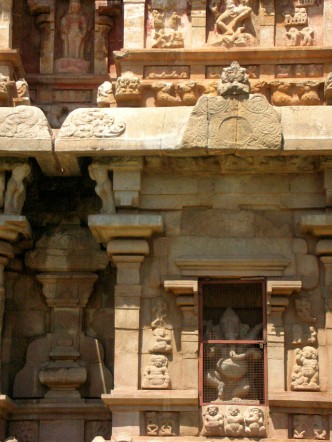 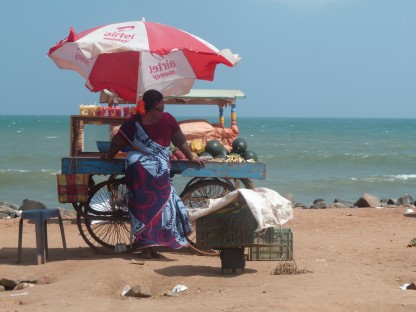 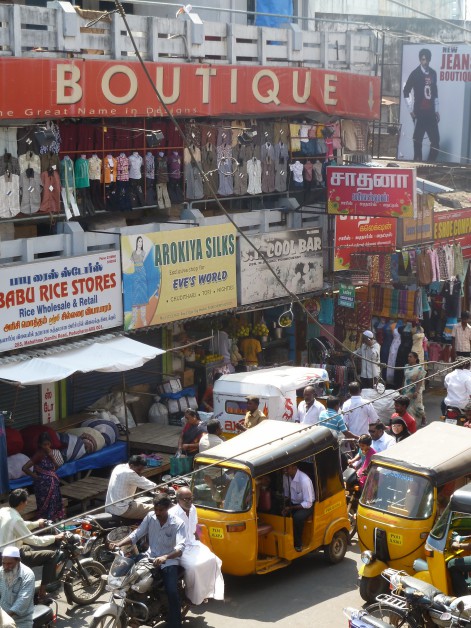 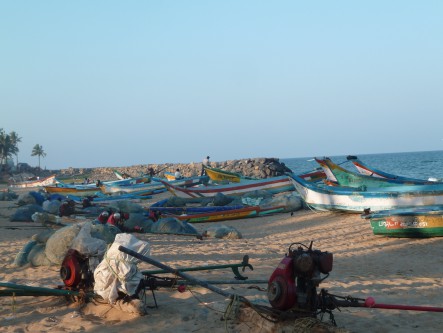 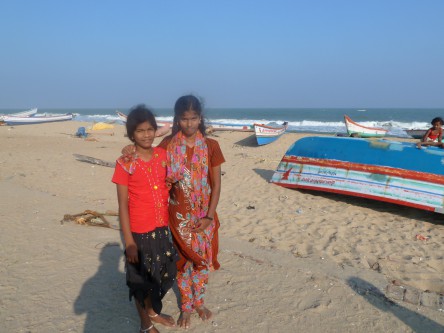 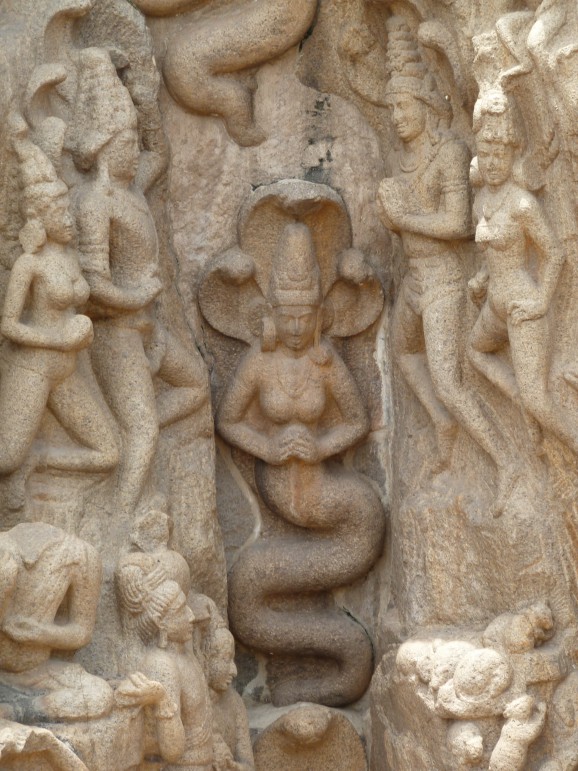 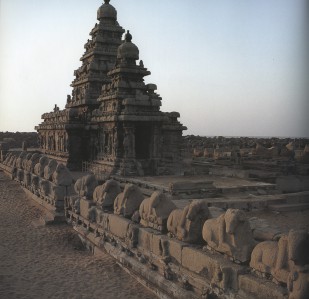 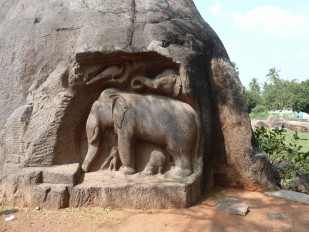 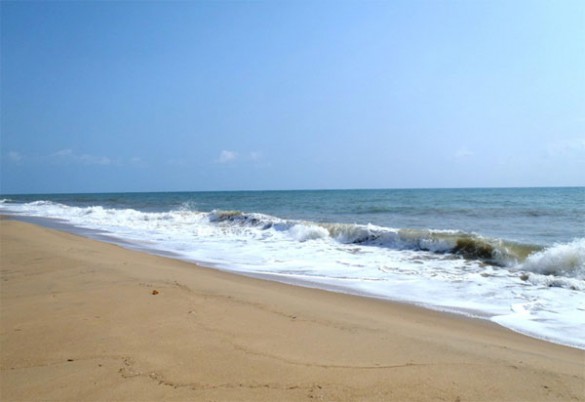 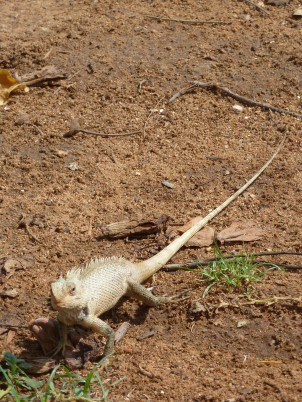 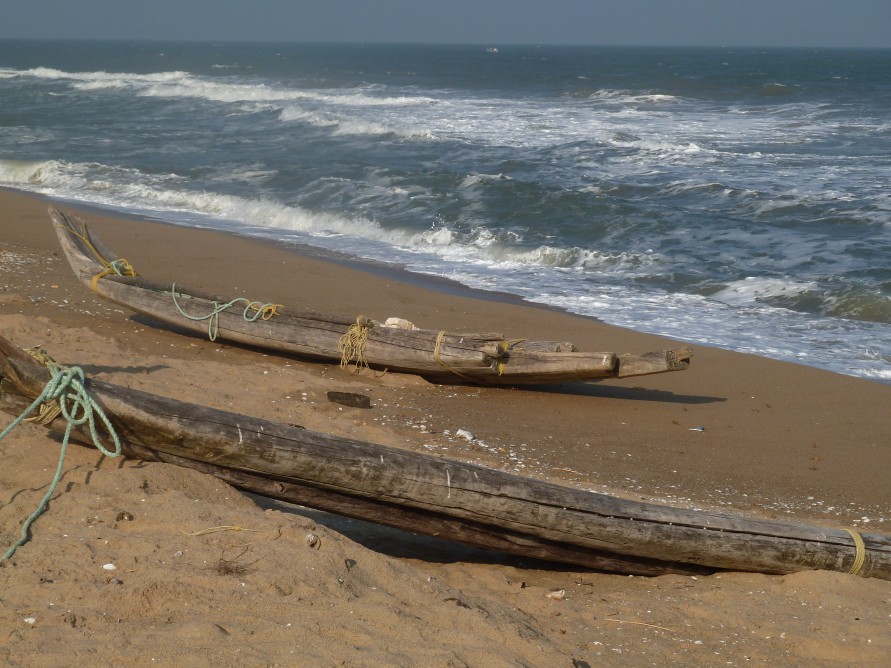